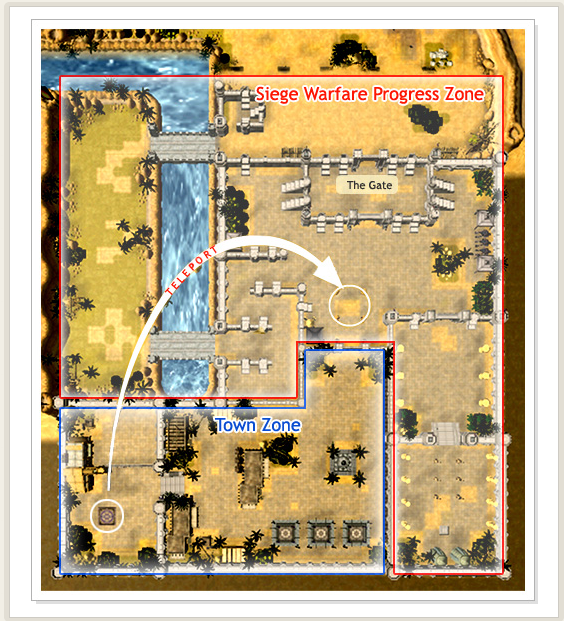 The Castle of Noatun is divided into two zones- the Town Zone (the bottom left corner) and the Castle War Zone (the top and bottom right corner). The Castle War Zone and The Fartel Desert Zone are separated by stockades at the entrance of the castle of Noatun. The outer side of the stockade is a normal zone, therefore during the Castle war, any PK activities there will be assessed by the PK system.
When the castle war begins, all the gates that are marked on the map will be closed. The Tower of Thor will appear just outside the city zone and the inner city zone. The Tower will attack everyone that comes close to it but it doesn't mean it can't be damaged. The city gate that separates the Town Zone and the Castle War Zone will not be damaged and the gate can't be opened during a Castle war. The guild members who captured the Castle of Noatun can use the Teleport Gate in their Guild Zone to teleport back to the "Castle War Zone".

All players are allowed to participate in the Kingdom of Noatun" castle war. This skirmish is characterized by two kingdoms fighting it out for the honor of getting the castle of Noatun. White-caped players can still participate in the war, and it they can choose freely which side they want to belong.

- Garrison : The guild master of the guild that owns the Castle of Noatun" and players from the same kingdom will act as the Garrison during the war.
Kingdom guild master players participate in siege warfare as Garrison

- Aggressor : All other players except Garrison

- Garrison : Guild member and guild master in "Kingdom of Noatun", guild master and players who belong in
same kingdom
- Aggressor : Other Players/Kingdom
- Progress : 18:00 / Notice for the start of Siege Warfare which will be broadcasted after 5 minutes throughout the server.
18:05 / Siege Warfare begins, each gate is closed and "Tower of Thor" is created
19:55 / If the castle is defended successfully, the Garrison will win the Siege Warfare.

Important things to do to gain victory in Siege Warfare

Once you have destroyed the "Tower of Tore", you will be able to see an "Altar of thor" in that exact position. If other guild masters manage to enter the altar, a message will appear: "____has occupied the altar of Thor."
After staying there for 5 minutes, you will then get a message "___has taken the castle of Noatun". It means that you have successfully claimed the castle of Noatun. After the siege, the winning guild master will get the "Crown of Atila" and cannon. He will also receive two "Conjure cannon sills books" which is needed to use the cannon.

In order to get the "Crown of Atila" and the two "Conjure cannon skill books", you must first empty your inventory.

Reward for the Owner of Noatun Castle

Application of PK mode in the Castle War

When the siege warfare starts, the PK mode will be changed from below and the chaos point system will be applied.

- When kingdom possession PC is attacking

¡Ø If you fight near the barricade of Castle, you can sometimes be affected by Chaos point. Just try to stay inside the Castle as much as possible. 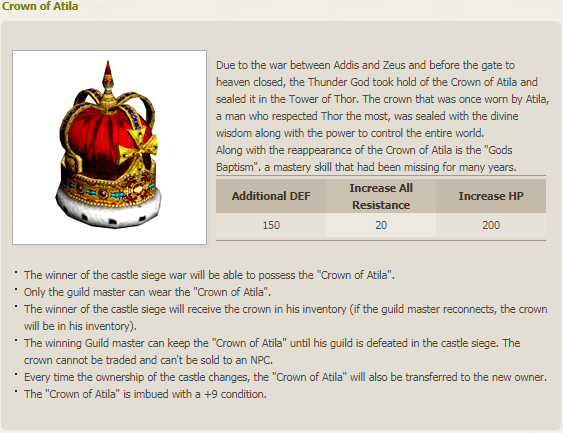 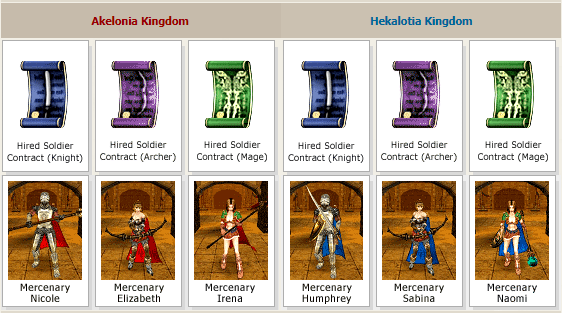 After a month and a week, the tower was completed. The energy emanating from Noatun castle spread throughout the town and gave added power to the owner of the castle.

After the castle war, the Tower of Thor will become complete. When this happens, additional rewards will be given to the champion guild. 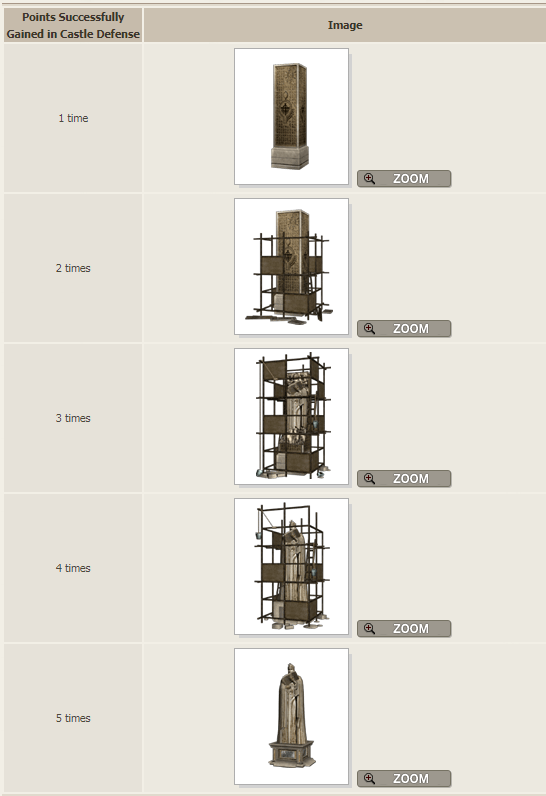 After successfully defending the castle for 5 consecutive times, the players will get the extra EXP Points rewards when hunting monsters in all areas.

* If the players are also the guild members of Castle of Noatun, they will get the guild reward plus the kingdom reward with 4% bonus.