The champion guild is a guild that owns a guild zone in a specific town and you can check who is the current champion and their number of consecutive wins by clicking on the victory's tower.

The number of consecutive wins will be inscribed in the tower and the max number is 5.

Guild members of a champion guild have the following benefits :

- When you connect to game, you will start in the town's guild zone

- When you buy items from that town's shop, you will be entitled to a discount of 30%.

- The right to collect taxes for all trades in their occupied town.

- Tax rate can only be changed by guild master and ranges from 10%~20% and can only be done once a day.

Only the guild master can check collected tax in real time through NPCs in front of each guild zone.

NOTE: The guild master must get the tax between these times 20:30Hrs to 00:00Hrs after guild war or else

the tax will stay in the NPC and will be accumulated up to the next guild war.

The guild war between the champion guild and the challenger guild begins automatically at each server every 20:00Hrs

on Sunday. The Guild war application must be submitted by Saturday.

You can apply for the Guild War Challenge through NPCs in front of the guild zone of each respective town. Application time is within 24 hours every Saturday, but it can only be done by the Guild Master and Guild chief.

The Guild that paid the highest fee will be chosen.

- 20:00 : The Guild Champion Master and all his guild members will be summoned to the Guild War PK arena and each Guild will only summon 26 people (If your guild has more than 26 members, members will be chosen randomly).

In case there are member from each guild survived, the guild with highest point wins.

will be automatically teleported to the Guild Zone of the town.

In case of tie, the defending guild will remain as the champion.

(¡Ø The starting time of the guild war may change depending on the server condition.) 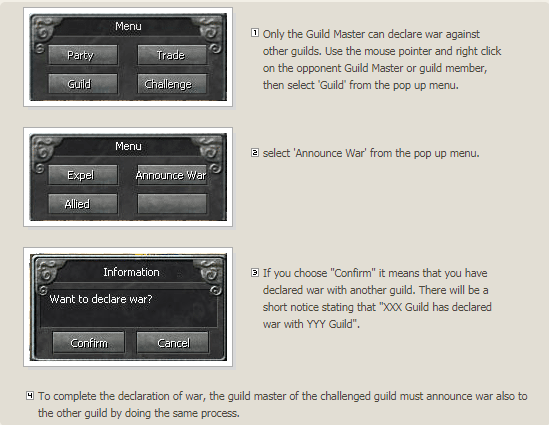 "Teleport" and "Summon" commands are not available during guild wars.

Guild members must gather in the town where the war will commence. For example, if you challenge the champion guild of Armia, you have to be in Armia town.

The minimum gold requirement for guild war is 50 million.