All new characters start with 0 Chaos points. Every time your character kills another character, you will get deduction on your chaos points. The character with less than -65 chaos points will have their name in black or will become "blacklisted". Killing blacklisted players will not give you chaos penalty.

[How to check your present chaos point]

- Input the command: "/cp" in your chatting window to check your present chaos point.

[Circumstances where chaos points will be deducted]

If you want to increase your Chaos Points further, you should try leveling up or use the "Chaos remission stone" item.

[Exception of chaos points]
You won't lose chaos points during guild wars.
Chaos Points are not deducted when you're inside the PK area in every town.

Penalty according to Chaos points

The PK points system for a newly created character is 0, the range of points is from -75 to +75 points.
The color of the player's name will change according to where the character falls into in the category of PK Points System. The color will not change dramatically, but gradually.

The experience point to be deducted on a character with negative chaos points will be based on the PK points system.

To attack players who are not being blacklisted, the one who initiate the PK will be temporary be blacklisted; the time limit is 1 minute. During this period, the PKer might be attacked by other players, hence, when the PKer being attack by other players, the rules in PK System will not be applicable on the PKer. 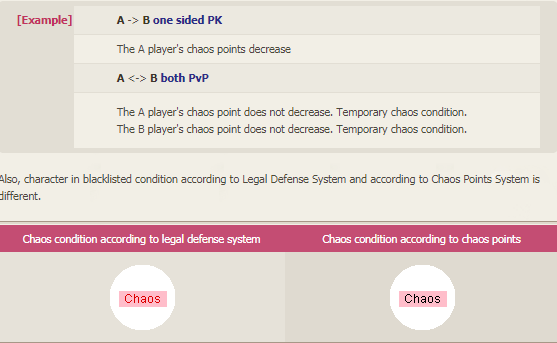