When you get disconnected from a party, you are permanently seceded from the party but forming or joining a guild is a different case. A guild entails a more lasting involvement. The "party" is the center of gameplay but the "guild" is the center of the community. The guild system consists of the guild war, ranking war and guild battle.

The "Guild Master" can appoint 3 "guild chiefs" (sub-guild master)'. A guild chief has the power to invite players to join the guild and to lead a battle when the 'Guild Master' is not available. 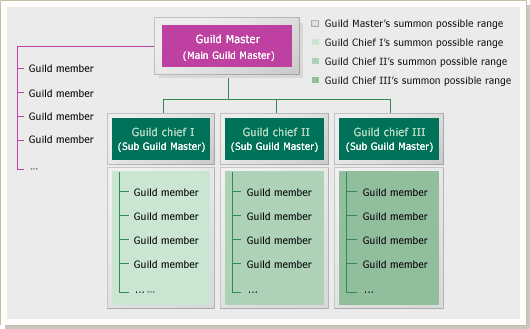 [Dominate guild member]
The most important role to make a guild size bigger guild member can dominate his favorite character to guild member as spend his gold.
A dominate method is the same with 'chief guild master' one, the dominate price is 4,000,000.

If you can't play as guild master or guild chief, you can assign your title to a guild member.

It is free to transfer the guild. (Master medal and guild member medal is exchanged)

-Make a guild mark
You can do guild after create guild in game and make a sentence. Because you can check guild name as command but the other ones are guild sentences. Namely, the other party can check with 'guild sentence'.

- Mark guild
A guild that showing in screen is sentence and if you input command '/[character name]', guild name is show up on screen. But, the other character must be on-line and you can check it's chief guild or not. You can check 'guild master and chief guild master', guild member sentence with sentence frame. 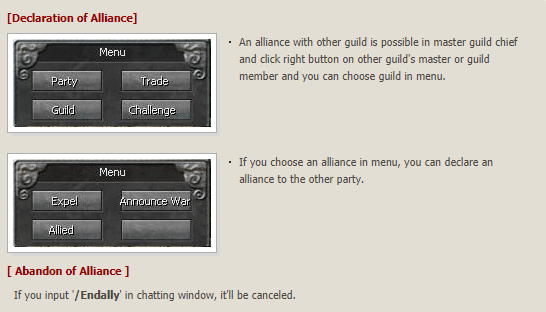